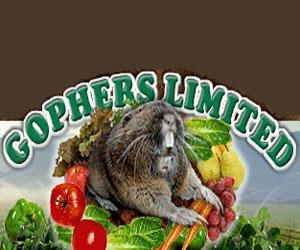 Gophers Limited of Felton, California (831-335-2400) is dedicated to the humane and efficient resolution of human and animal conflicts. Established in 1999, primarily focusing on gopher and mole control, Gophers Limited has expanded into resolving any human and animal conflict in ways that do not degrade the environment and water resources. Fast efficient trapping methods are used in the place of poisons eliminating the possibility of secondary poisoning harming children, pets and other wildlife as well as our valuable water resources. If possible, exclusion or repulsion of the pest is the method of choice, hopefully, permanently solving the problem instead of incurring constant pest control costs. We also train large and small groups, agencies and individuals our methods. Gophers Limited works with clients of all scales, from farmers and ranchers, schools and institutions, to residential and commercial landscapes. Do it Yourself and Save The Cinch Gopher and mole trap is what makes easy gopher and mole trapping possible. There is no other trap on the market as effective! Be sure to buy origional Cinch traps made in the USA. The copies made in China do not have the same action or quality nor do they support our economy. The kits I sell have everything you need to be a successful trapper. If you are not successful I will coach you by phone until you are. Owner Thomas Wittman started his gopher career as an organic farmer in 1982. He trapped gophers daily for over twenty years and founded a wildlife damage control company focusing on gophers, moles, voles and ground squirrels. He has been a consultant on rodent problems since 1991 and was educated at the University of California, Santa Cruz as an ecologist where he studied under the famous wildlife ecologist Raymond Dassmann. Today, along with focused presentations about non-toxic vertebrate pest control, field training of farmers and gardeners, Gophers Limited non-toxic measures are becoming the method of choice. Gophers Limited is insured and owner Thomas Wittman holds a PCA license from the Department of Pesticide Regulation and a nuisance animal trapping license from the California Department of Fish and Game.